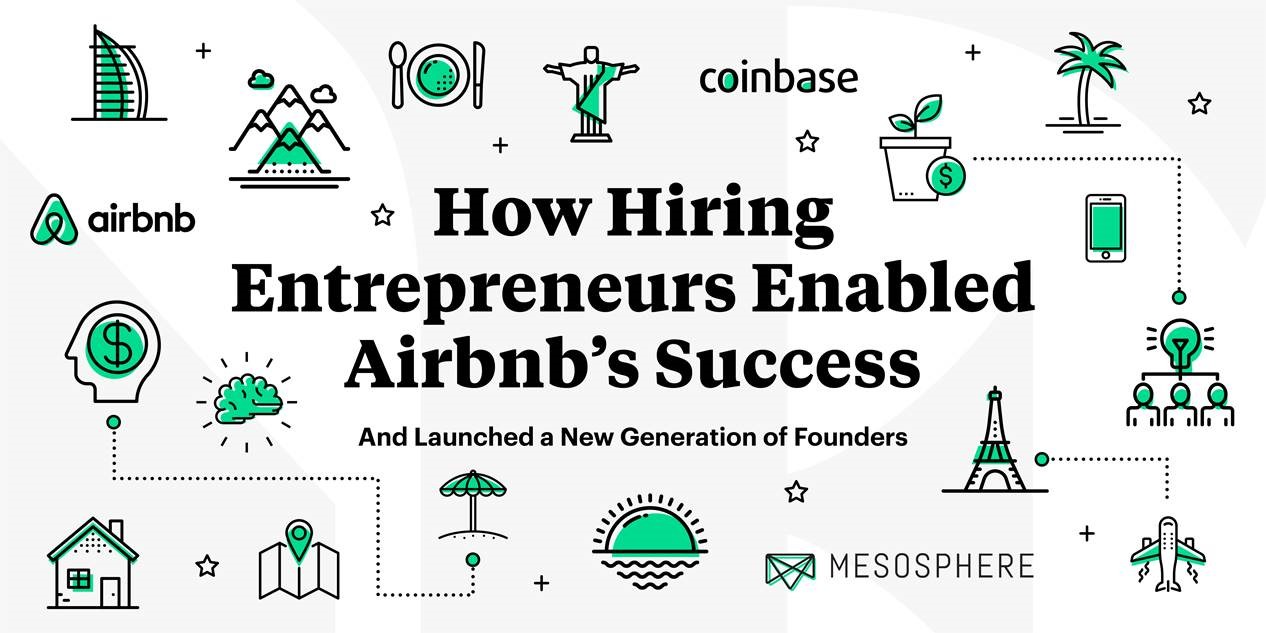 When I left Airbnb last year, I was delighted to join a group as dynamic as the company itself: the Airbnb alumni. And I’ve been intrigued, though not surprised, to learn how many of those bright and creative professionals are developing their own startup concepts. After all, our time at the company trained us to do just that.

Employees of one great company seeding the next generation of startups is the circle of life in Silicon Valley. It started with Fairchild Semiconductor in the 1960s, was exemplified by the PayPal Mafia in the 2000s, and is happening again today with employees of Airbnb. Several Airbnb alums have already founded transformational companies, like Brian Armstrong at Coinbase and Florian Leibert and Tobias Knaup at Mesosphere, and I expect many more to follow. But the fact that people have left the company to implement their own big ideas isn’t a bug. It’s a feature, a direct result of the entrepreneurial culture that’s helped Airbnb thrive and have an outsize influence on the industry, too. When is all said and done, I believe the entrepreneurial culture cultivated at Airbnb will make us the next wildly successful alumni network — maybe even an Airbnb mafia. Here’s how hiring entrepreneurial staff and encouraging them to think big was part of Airbnb’s success — and why other founders shouldn’t hesitate to follow suit.

Don’t Be Afraid to Hire Entrepreneurs

The secret to Airbnb’s success was to hire for entrepreneurial skills. The founders, particularly Joe Gebbia, were involved in the rigorous hiring process for every employee up to around 500. Internally, we called it the search for “cereal entrepreneurs” — a reference to the Obama O’s and Cap’n McCain’s cereal boxes the founders sold during the 2008 election (raising enough money to keep the company afloat).

We looked for builders, not maintainers. We didn’t focus on the head of a group who managed a well-established product; we targeted the doer with a track record of influencing and leading a team to build something from the ground up. Our mandate was to identify individuals who could create. We would ask candidates pretty simple questions, like “How would you go about doing that?” If their response was that they’d ask someone else, then they were looking for answers from others. If their response was that they would test, try, and iterate their way to making it happen, that was a clear sign that the candidate was used to taking action.

The individuals we brought on had unbridled energy and scrappiness; they could just make things happen. But they didn’t necessarily have strong domain knowledge in marketplaces, travel, or offline interactions. Instead, we looked for a spike in excellence elsewhere. One engineer on my team had been a professional long-distance roller-skater! We wanted to see that the people we hired had committed to something.

This entrepreneurial culture gave Airbnb a deep well of creativity to draw from when we needed to solve extremely complex problems. No one was wedded to traditional frameworks of how things “should” be done; we just iterated until we got where we wanted to go.

Brian Chesky is a visionary who always worked backward from the state of the world he wanted to achieve. As a result, his team did, too. We really believed that we could build anything. And as the product expanded and seemed to be positively changing the real world around us, that belief only grew stronger. This visionary energy pushed teams to think bigger and to tackle seemingly insurmountable problems. That’s how, in 2015, we pulled off a launch in Cuba in just 100 days.

Brian was emphatic that we should enter that market — one in the process of opening for the first time, but still rife with complication — and give new meaning to our core value, “Belong anywhere.” So with little more than a “Let’s launch in Cuba!” from Brian, an unlikely assortment of colleagues rallied to make this big idea a reality: legal to understand the intricate requirements, on-the-ground operations to onboard hosts, and product to enable commerce between Americans and Cubans, a non-trivial payments problem.

We held daily team calls to stick to our 100-day timeline. The night before launch, the operations team and I were on the phone until 4 a.m., manually onboarding over 1,000 hosts in Cuba. Finally, we hit the go button for the next morning, April 2, 2015, when the press embargo would be released. It was the largest day of press the company had ever had, and Cuba ultimately became our fastest-growing market ever.

This complex launch was possible because of Airbnb’s scrappy and creative talent, yes, but also because leadership told us every day that no problem was too complex if we broke it down and tackled each part. The problems we were working on were honestly hard to solve. Airbnb was one of the first online-to-offline businesses, and we had to think about the effects of our product in the real world. But Airbnb’s founders didn’t want to aim for what seemed feasible; they encouraged us to start with the experience we would create if there were no limitations. By setting audacious goals — and tasking every department with contributing what they could — they gave us the go-ahead we needed to achieve big things.

Challenges of Entrepreneurialism and Big Thinking

What are the challenges of hiring a bunch of smart, driven people and encouraging them to think big?

As I told Leigh Gallagher for her book The Airbnb Story, “[Airbnb is] the most expansive and iterative culture I’ve been in. There’s always a question of ‘Why not?’” It’s also the most collaborative culture I’ve ever worked in, and that openness encouraged innovation at every level of the organization. When you see good ideas being elevated regardless of a person’s role or title, there’s greater incentive to speak up.

The downside of that, though, is that efficiency takes a hit. As more people were brought into the conversation, listening to every voice was not always easy to manage. And that wildly collaborative environment often resulted in blurred lines between who was accountable for what.

We solved this by asking anyone with a great idea to back it up with a one-pager explaining how they would execute it. These documents described the problem and how solving it would positively impact the user, then detailed the steps required, resources needed, estimated timeline, and ongoing maintenance. Even great ideas are often not actionable at any given moment due to competing priorities and lack of resources. These one-pagers helped clarify which ideas we would immediately execute on.

In addition, we built a culture of team recognition instead of individualistic triumph. Teams working on similar problems would commonly overlap. To combat infighting, we focused on key goals — and celebrated everyone who helped achieve them — to bring the teams together. Later on, we organized teams according to an objective, not a function. The result, over time, was that all team members came to understand other functions’ capabilities and the “why” of what they were doing on a day-to-day basis.

What the Future Holds

I feel extremely fortunate to have been a part of Airbnb during a particularly challenging, but rewarding, period. As a result of the company’s uniquely entrepreneurial culture, many Airbnb alums will no doubt start transformational, mission-oriented businesses of their own. The founders have always wanted to influence how people interact with the world. By fostering a culture that prioritized that kind of big thinking, they’ve compounded their ability to do just that. I am excited to see what my compatriots create, and I’ll be rooting for them along the way!

For aspiring founders, my recommendation is to seek out creative, free-thinking individuals to help build your startup. It’s extremely challenging to grow a company, and you need team members who will lay the foundation with you, not just wait for the home to be built and complain about the finishings. And think big! In Brian’s words, “Don’t edit your imagination.” It may take 10 years to accomplish what you want to, but you will never get there unless you articulate what the future looks like. You will not know all the steps it’ll take to get there, so surround yourself with entrepreneurial talent, encourage them to dream with you, and build what is to come.