The Future of Design in Start-Ups Survey: 2016 Results

Over the past five years or so, design has certainly become a hot topic in start-up circles. We’ve seen large incumbents like Google embrace design, and seen entire brand-first consumer e-commerce companies reach stratospheric levels of success. And while everyone talks about design’s importance in building an amazing company, it’s been very surprising to us that there is very little data about why, when or how to integrate design into company operations.

So, in August of 2016, we launched an anonymous survey to better understand the importance and emerging trends of design in start-ups. We wanted to know what made a design-centric company, design-centric, and to see if it was actually thought of as a positive investment when building a company. We did this in collaboration and with support from a diverse set of design leaders including: IDEO, Uber, Invision, among many others; we benefited greatly from their insight and support. A special thank you to Shalin Amin at Uber, Katie Dill at Airbnb, Diego Rodriguez at IDEO, Emily Heyward at Red Antler, and Stephen Olmsted at Invision.

We had over 400+ companies respond; 302 were venture-backed, along with over 100 agencies or independent companies. Responses were from all around the globe, included all stages of growth, and were across both consumer and enterprise. There were even eight unicorns among the respondents, whose data provided a very unique perspective on the role of design in company building.

What Did We Hope to Learn?

We set out to gain insights about:
• Design’s Influence - To what extent do companies care about design? Can design in fact help you succeed and grow?
• The Value of Design - How do you measure the actual impact of design?
• Design Team Growth - How in-demand is talent really? How are teams thinking of growing?
• The External Design Eco-System - Do companies get help from the outside? And if so, for what?

Here’s the high level on what we heard…

First off, do companies actually think design is valuable? At least in this group they do. It turns out we heard from a very passionate group of respondents:

• 87% of the respondents said that design was important, if not very important.
• 85% of all companies have Founders or C-level executives weigh in on design decisions.

There was also a large portion of companies, almost one-third, that had a designer as part of their founding team, which is a little higher than we had initially anticipated.

What we found most interesting in the data however, was that there was a subset of companies, that were larger in scale, had raised at least $20M in venture funding, and had at least 20 designers on staff (47 companies) which we are calling Design-Mature. There also some truly successful unicorns with valuation in excess of $1B (eight companies) which we are calling Design-Unicorns. These two cohorts of companies shared a strong belief that design had material impact on their success, even more so than the broader group of start-ups. In short, the most successful companies believed that design had a strong and positive impact on their company building strategy.

For instance, the Design-Unicorns, compared to the broader group, believed that: 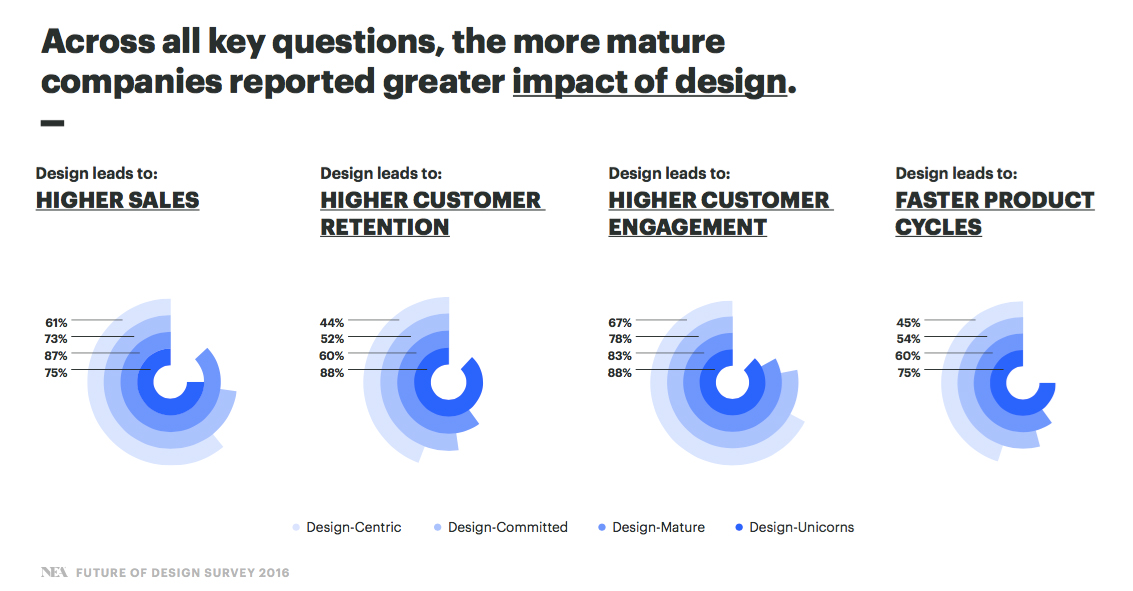 What Else Did We Hear?

In addition to the belief that design can fuel success, there were also a handful of emerging trends to take note of:

1. Design Adds Value in Both Consumer and Enterprise: In the overall respondent base, but also in the Design-Mature cohort, we saw that enterprise companies were equally as invested in hiring designers and committing to design as part of their strategy. There was an almost even split of consumer and enterprise companies and we also saw a high number of design founders on enterprise teams, which bodes well for the current and next wave of enterprise products being delightful to use and user-centric to help them win in the marketplace.

2. Design-Centric Characteristics Were Unanimous: We asked everyone what the key characteristics of a ‘design-centric’ organization were and it was unanimous across the whole group that the six characteristics below were key (in order of importance)…

What we found heartening here was that design integration across functions and being user-centric were at the top. The belief that design should not just have a seat at the table, but be integrated cross-functionally, is a key point here and a concrete action which teams can execute on as they build out product and far more specific than just saying there should be ‘design culture’.

3. Team Structures Change with Growth: It appears that most companies as they become more mature transition to cross-functional ‘pods’ or ‘squads’. Which makes sense. When you are smaller, a central design team which either sits next to or within product can nimbly serve the company’s needs. As you get larger and the product becomes more complex, you can distribute senior design leadership across different ‘pods’ to get back to the speed you had when you were smaller. We’re curious to hear more from folks about what the playbook is for this move.

4. Design Talent Wars Will Continue: We’ve seen this across the industry for the past several years, but it appears the demand for design talent isn’t going to let up anytime soon. Most companies reported that they will grow their design teams by 50%, at all stages of growth. Moreover, Product Designers are the most in demand by a clear margin. 70% of Design-Mature companies are looking for Product Designers, while 100% of the Design-Unicorns are.

5. Start-Up Branding is A Real Industry Now: Nearly all of the companies that responded went to the outside for design help from an agency or a freelancer, and all companies plan to double their spend on outside services over the next year. Perhaps more interesting, however, was what they were primarily going to the outside for: branding. This is clearly becoming a more mature industry and it will be neat to see how this ecosystem of start-up design providers evolve in the coming years.

Our intent in doing this was to share the findings with the broader ecosystem, such that Founders, CEOs, Design Leaders, and those just starting a company could benefit from the insight. So, to that end, we’ve launched a site that shares the main insights of the survey along with a downloadable document that has all the detail at: futureof.design.

Our hope is to continue the dialogue, so we’ll be posting and double-clicking on specific findings over the next few months in more detail. But more importantly, please share with others and let us know what you think!